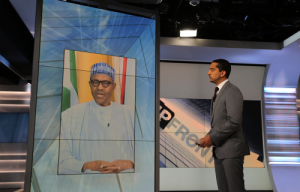 The recent appearance of President Muhammadu Buhari on UpFront, an Aljazeera chamber of mental torture for public and political figures, was a risky gamble. And with all at stake, it was a miscalculation by his media handlers desperate to establish and promote perception of a nation under control.

Like many Nigerians sensitive to the caricaturing of our national identity and politics, which is already an international pastime, I feared our President’s encounter with the anchor, Mehdi Hasan, a journalist notorious for embarrassing grilling of influential newsmakers.

I like Mehdi for his guts, but he’s irritatingly obnoxious and, in many of his sessions I’ve watched, he came out as absolutely rude. He manipulates his ineloquent and camera-shy guests, and this bamboozling enthusiasm often gives him the upper hand to ridicule them. So, I feared he would exhibit similar style of questioning, approaching them like an interrogator assessing a dull offender, in his first with our President.

But that encounter was well-managed to a certain extent; it further restated the President’s impressive self-esteem and his amazing composure – even asking the overbearing young man seeking to intensify his pressure “Will you let me finish, please?” – would definitely promote a perception of Nigeria as a nation under a responsibly wise and conscientious human being.

Even where you fault the President’s responses, especially his insistence that beyond newspaper reports he’s unaware of human rights violations by the Nigerian armed forces in the war against terror, which was documented in a report titled “Nigeria: Stars on their shoulders: Blood on their hands’ by Amnesty International in June 2015, you’ve to agree that the interview would’ve been a global disaster if it were former President Goodluck Jonathan on that hot seat.

Some of us lauded the media outing despite the slips and half-truths in the President’s responses partly because of his disposition, and how he resisted being made a subject of embarrassing international jest and viral social media memes by a journalist who has a reputation for achieving such. And quite easily.

The response to the claims of violations of human rights by the Nigerian troops was one of the President’s half-truths, because he was in the news during the Jonathan days as a critic of the military’s highhandedness in the fight against terror. In one of his typically distorted and sensationalized statements before his election, Buhari’s call for tact and caution in the crackdown on the Boko Haram was taken for sympathy for the Boko Haram by the adversarial media that had tried so hard to portray the man as a provincial extremist. The attributions were based on his interview in Hausa on Liberty FM sometime in June 2013.

Whoever has followed the happenings in the northeast Nigeria, and especially the origin and escalating terrorism of the Boko Haram, would testify to the avoidable security lapses and recklessness that resulted into the disaster that has now turned the country into a pitiable laboratory of human sufferings. Which was exactly the view aired by Buhari on Liberty FM, and denied on Al Jazeera TV!

Another gaffe of the President was his defence of the tactic employed by the troops in defeating the insurgents, and flushing them out of their strongholds. He said that the troops have succeeded in cornering Boko Haram to their “strongholds” – what his predecessor referred to as “fringes” while also claiming victory in his counterterrorism efforts – and that they’d be flushed out when the Rainy season starts in December. That’s a riddle some of us are yet to crack, because that’s about the Harmattan period, our Dry season!

My sympathy for the President was a subjective identification of his “questioner”, Mehdi Hasan, as a bully capable of humiliating him and present him, and the nation too, as another of black man’s disgrace. And if Mehdi had done his research well before the interview, he would’ve known that the President was not only aware of the highhandedness of the military in their counterterrorism, but was even a critic of the trend before his election. We must also be grateful that Hasan had no knowledge of the meteorology of Nigeria to see through the President’s claim of rain in December. I trust Hasan, if he had, to look the President of the most populous black nation in the eyes and call him by what he’s done: a liar.

While some of us may still choose to praise Buhari’s majestic disposition in his responses to Mehdi, ignoring the half-truths and lies expressed to escape the journalist’s obnoxious interrogation, we must all note that deception, which is the firewall of politics and diplomatic relations, doesn’t salvage a nation at crossroads. The frequency with which bombs go off in Nigeria, while we are being entertained by a soap opera that is the ministerial screening, is one more reason to remind the President that the honeymoon is over; and that his claim of defeating the Boko Haram in December, restated on Al Jazeera, with the reality pointing to the opposite seems more like an assault on our collective sensibility than a determination do achieve so. May God save us from us!

A temple of raw thoughts...

Words green and lush, tales beautifully rendered, humor wild and free. A place to be...

Self expression through words and pictures

Set yourself free, speak frankly, get it off your chest mate.

Thoughts on life, the universe, and everything

Equal measures of Red, Gold and Green with even more Black

this is still under construction, the main purpose of this blog is to correct and share valid information about africa, its people and culture

Fifty Shades Of Me